2. While Les Mis is long, Hugo broke it down into small chunks.  It consists of 5 volumes.  Each volume contains 8 to 15 books.  Each book contains 2 to 24 chapters.  On the new Kindle, it will gauge how fast you read and tell you about how much time you have left in each chapter.  It’s the best feature ever.  I can read most chapters in about 5 minutes and when you chip away at it like that, it goes quickly.

3. The free Kindle edition is abridged.  Abridged is lame.  Read the Unabridged version and skim the bits that you don’t care to read. On Kindle, it cost $3.  Hapgood is the translator I’m reading and honestly, the writing is interesting enough that even the historical bits with no character development are still good to read.

4. Valjean’s backstory is pretty much the same in the book and the musical.  We learn a bit more about his sister in the book.  When they lived together, she had lots of kids and he was helping raise them.  While in prison, Valjean learns that she only has one child with her and no one knows what happened to the others.  The little boy that’s left has to wait outside for an hour every day waiting for his school to open, even in the rain.  Even in the tiny stories and asides in the novel, everyone’s life is miserable.

5. The biggest shocker of the novel so far: Fantine is blonde!  Hugo mentions it more than once.  And after you read about Fantine’s back story, her fate is even sadder.  I can’t explain the whole story here because I’m in the middle of it.  More later, perhaps. 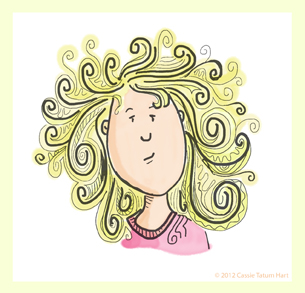 In honor of blonde Fantine, here is a new blonde girl, drawn on my tablet.  This is not meant to be Fantine.  I just like drawing curly hair and wanted to try it out digitally.